The Housatonic Line—also known as the Berkshire Line—was the route to the Berkshires from 1842 until 1971, when service stopped along with similar closures across the United States. It operates today as a freight line run by Housatonic Railroad Company. 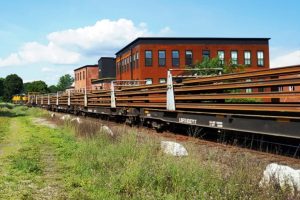 The Massachusetts portion of the track was purchased in 2014. From the agreement: “MassDOT’s acquisition of the Railroad Assets is intended to facilitate the Commonwealth’s long-term plans to restore regional passenger train service linking the New York City metropolitan area and the Northeast Corridor megalopolis generally with the Berkshire region of western Massachusetts. The acquisition of the subject Railroad Assets is one step in what MassDOT anticipates will be an involved, multi-step process that ultimately will lead to the establishment of a new railroad passenger service route in the Northeast.” 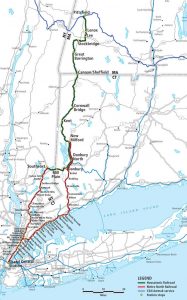 Commonwealth as set out in Choices for Stewardship, the 2018 report of the Governor’s Commission on the Future of Transportation.

Of the 2.6 million (2017) tourist visitors to Berkshire County, the majority travel from New York City. A survey in 2018 found that 40% of the interest in passenger rail to and from New York came from county residents. These residents and visitors travel by car or by train to Hudson or Wassaic, NY. The restored Housatonic Line will be compatible with existing travel patterns and serve (and attract) county residents as well as tourists.

The Train Campaign is the rail advocacy organization for Berkshire County and Litchfield counties, sharing a vision for passenger rail as the essential framework for efficient, sustainable transportation in the 21st century.  Our mission is to foster a robust network of rail transportation options.  The Train Campaign is a project of Barrington Institute, a 501(c)(3) charitable organization, EIN 20-1670260, and a founding member of the Western Mass Rail Coalition. Contact: thetraincampaign@gmail.com.