Here’s our interns’ report on the East-West Rail Study meeting last week. They are also participating in our weekly “Office Hour,” an informal meeting that anyone can join. Today, at 2pm, we’ll be talking about the economic benefits of rail. The Zoom link is below, along with a list of other events, including a program in partnership with Bascom Lodge on Mount Greylock.

The Massachusetts Department of Transportation held a virtual town hall this past week regarding the potential of an East-West Rail. Attendees and board members were given several proposed cases ranging from partial train service supplemented by buses to the implementation of high-speed rail. Options favoring buses were met with strong backlash, being voted down unanimously. Instead, most residents favored the implementation of rail on the already existing lines, arguing that high-speed rail was much too costly a project.

In a change of tone from the previous meeting, the Massachusetts Department of Transportation made clear their intention to formalize the proposal, a large step along the pathway towards securing federal funds. According to an article in the Boston Globe, Transportation Secretary Stephanie Pollack had stated before that the chances the project would receive a grant from the Federal Railway Administration were low. This being said, U.S. Senator Ed Markey recently put forward a bill that would assist equitable and environmentally conscious projects such as the East-West rail receive funding for the project.

The Massachusetts Department of Transportation made clear that the study does not include both Albany and New Haven. With both towns being potential large potential sources of revenue, many in both the advocate and engineering communities have questioned why the rail service must end at the state’s borders. The argument is based on population, ending the rail service in a smaller town simply does not make sense in comparison to an Albany or New Haven.

A question that was not touched on during the meeting was one of the costs laid out by CSX, who set the standards the Massachusetts Department of Transportation used in calculating the costs of building. Doing so allows the state to fallback if the project runs overbudget by being able to say their standards are not the ones being used.

Looking forward, the Massachusetts Department of Transportation aims to refine the favored options, looking specifically into controversial ridership estimates. Currently set at a twenty-mile radius, the potential revenue excludes many towns for whom the benefits of a train have a strong probability of outweighing driving. With the progression towards a complete plan, the East-West Rail continues to evolve towards creation.

Congressman Richard Neal, a Springfield native who chairs the U.S. House Ways and Means Committee, plans to unveil a bill “in the coming days” to help secure a future for a passenger rail link between Boston and western Massachusetts. Most stakeholders agree that federal funding will be crucial to launching a so-called East-West Rail project, particularly with the state’s initial price estimates ranging between $2 billion and $25 billion in construction costs. “I think the federal government is going to have to do its share, and I intend to lay out a plan in the coming days to do that,” Neal told the News Service. “I do want to point this out: the state found a way with the Big Dig, and recall that a lot of federal dollars were siphoned off from other initiatives across the state, delayed and put on hold for years, to accommodate the Big Dig. I am always of a mind to make sure there is regional equity.” Transportation Secretary Stephanie Pollack said Wednesday, when MassDOT unveiled an updated version of its study, that the project likely will not qualify for Federal Railway Administration grants at its current balance of benefits and costs. She pointed to legislation that U.S. Sen. Ed Markey filed that would create a pool of money with broader eligibility for initiatives like the East-West rail. Asked if his legislation would mirror Markey’s proposal, Neal replied, “I’m going to offer some thoughts on that in the next few days.” Neal said he was pleased that MassDOT’s new methodology, which it changed after pushback that it underestimated potential ridership, estimated four to five times more users of the expanded rail than initially thought. He added that the existing projections do not fully account for benefits such as reduced greenhouse gas emissions and greater access to housing. – Chris Lisinski/SHNS

Northwest Connecticut: Towards a Connected Future by Rail

Jun 23, 2020 04:00 PM Eastern Time
Train Campaign founder Karen Christensen will provide an update on work  and activity related to the Housatonic (Berkshire) Line. Register in advance for this Zoom webinar by clicking here. 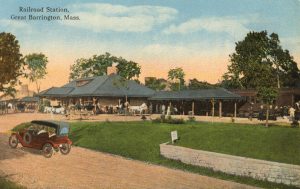 The Train Campaign at Bascom Lodge

July 7, 2020, between 6 and 7pm
Our interns will present information on the economic benefits of rail to individual towns and explain the various ways in which town leadership can make passenger rail a success.

We’ll be streaming the documentary The Last Train to Pittsfield on July 8, 2020, 6-7pm. Along with the 35-minute original, we’ll have some clips from recent interviews with Engineer Pete (above), who drove the train on that last run in 1971.

Would your organization or group like to host an online Train Campaign presentation for members? We can provide background, explain current issues, discuss future opportunities, and answer questions. We have lots of data, photos, and even film clips to share. Contact us for details.

About the Author: Anne