Home → Podcast → Opera and Classical Music in China Today
Next

Colin Mackerras discusses two Chinese artists whom he wrote about in the Berkshire Dictionary of Chinese Biography. First, Mackerras focuses on Lang Lang, a Chinese pianist, providing a look at Western classical music in China today. 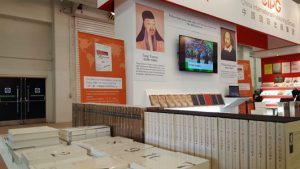 Shakespeare and Tang Xianzu display at the London Book Fair in April 2016.

The second figure is Tang Xianzu, author of one of China’s classics, The Peony Pavilion. Mackerras addresses similarities and differences between Shakespeare and Tang Xianzu, because 2016 happens to be the 400th anniversary of both of their deaths. Length: 26 minutes.

Professor Colin Mackerras is a well-known Sinologist who taught International Business and Asian Studies at Griffith University in Queensland, Australia, and is currently teaching at the Beijing Foreign Studies University. His areas of expertise include China’s ethnic minorities and Chinese theatre, as well as Western images of China.

Karen Christensen is the Chief Executive Officer and founder of Berkshire Publishing Group and a writer specializing in sustainability and community with a focus on China. One of her current projects is with George R. Goethals and Crystal L. Hoyt of the Jepson School of Leadership Studies at the University of Richmond. They are coediting Women and Leadership: History, Concepts, and Case Studies (A Berkshire Essential), and Christensen has ensured that there coverage of China and other parts of the world, including articles on Wu Zetian and Cixi drawn from the Berkshire Dictionary of Chinese Biography.