The Georgian Feast with Darra Goldstein

Home → Podcast → The Georgian Feast with Darra Goldstein
Previous Next

The Georgian Feast with Darra Goldstein 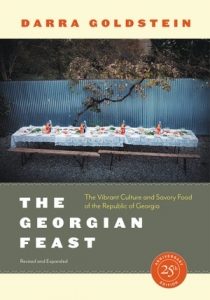 Professor and cookery writer Darra Goldstein talks with Karen Christensen about the 25th-anniversary edition of her cookbook, The Georgian Feast, published by the University of California Press. Their conversation focuses on the foods, and foodways, of Georgia, a country that Goldstein first got to know when she was writing her dissertation on the Russian poet Nikolai Zabolotsky. She explains what attracted her about Georgian cuisine, its distinctive characteristics, ingredients, and flavors, and talks about her favorite dishes, the warm hospitality that is central to Georgian culture, and the new chapter on Georgian wine by Alice Feiring.

Darra Goldstein is a Russian scholar and a popular food writer. Her career has included over three decades as professor of Russian at Williams College, in Massachusetts, writing a number of award-winning cookbooks and founding Gastronomica: The Journal of Food and Culture. Darra serves on the Kitchen Cabinet of the Smithsonian’s National Museum of American History and on the advisory board of the Julia Child Foundation for Gastronomy and the Culinary Arts.

Karen Christensen is the chief executive officer and founder of Berkshire Publishing Group and a writer specializing in sustainability and community with a focus on China. One of her recent projects was editing Asian Cuisines: Food Culture from East Asia to Turkey and Afghanistan, which includes a chapter by Darra Goldstein on the cuisines of Central Asia.

“Every Georgian dish is a poem.” –Alexander Pushkin

The post The Georgian Feast with Darra Goldstein appeared first on Berkshire Publishing.