“But the status quo is no longer working for this region, perhaps best known for its past and its traditions. For every summer home in the region, there are many more families struggling to afford their first home; for every excellent public school district, there is another teetering on the edge of collapse.”

Critical to this strategy is the use of high-performance rail to create a strong connection between economies of New York City, Boston, and the region’s mid-sized industrial towns. This network of New England cities will amplify the region’s economic capabilities, and will become the largest, most powerful innovation ecosystem in the world. 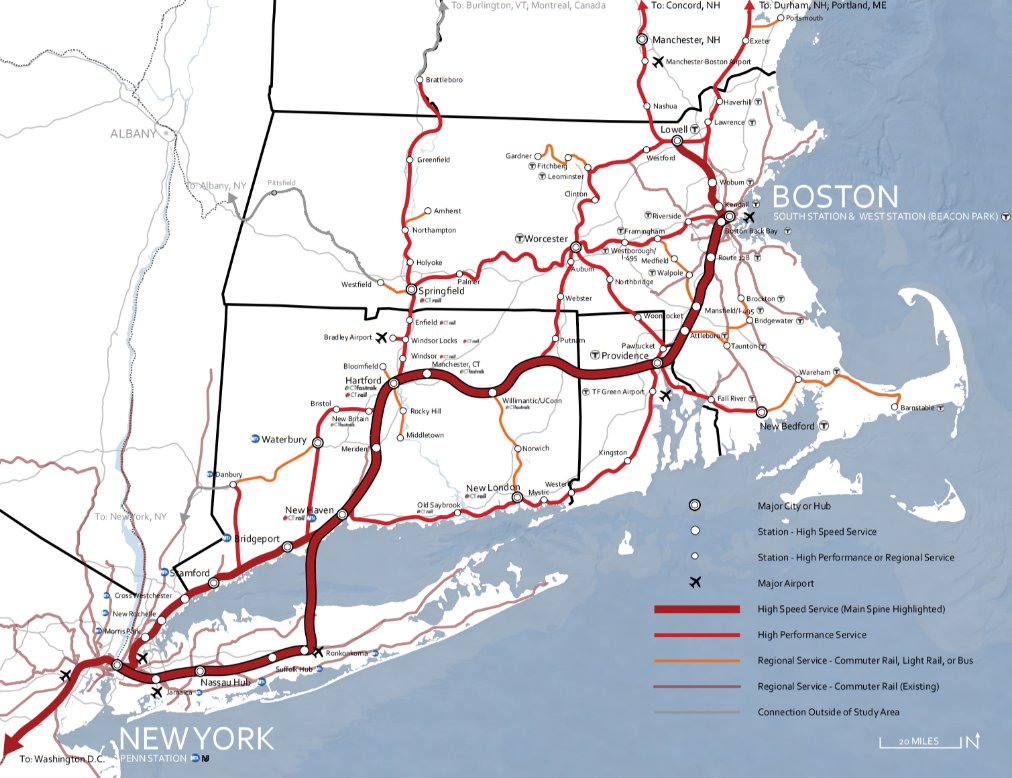 The proposed route for the New York – Boston service would run east from Manhattan though Long Island to Port Jefferson with stops at JFK and MacArthur Airports and major employment centers on the Island. From Port Jeff it would run in a tunnel under Long Island Sound to Milford and New Haven, and on to Boston via Hartford and Providence.

This route would avoid the need for the Federal Railroad Administration’s controversial proposal to add two tracks to the existing Northeast Corridor route through the fragile ecosystems of the southeast coastal communities of Connecticut.

The proposed Long Island route would provide enormous benefits to the Island, while at the same time connecting Connecticut with Long Island’s airports and employment centers. For this reason, Rebooting New England is engaging business, civic and government leaders on Long Island, as well as the Southern New England states.

At the same time, proposals to upgrade the New Haven Rail Line and branch line services will strengthen the connections through Fairfield County to New York City. And the proposed network will include the provision of new commuter rail service from Springfield through Worcester to Boston, as well as further upgrades to the existing Springfield/Hartford/New Haven service and its extension north.

Over the past four decades, the de-industrialization of New England’s economy has left a dozen mid-sized former manufacturing centers with declining populations, tax bases, household incomes and increased poverty and racial and social isolation.

While these smaller cities struggle with economic decline, the metropolitan economies of nearby Boston and New York have boomed, creating ever greater disparities between the economic prospects of these places.

The decline of these cities and their counterparts in Northern New England is reflected in growing state structural deficits in all six New England States. As a result of these trends, Connecticut’s yawning budget deficit this year will only get worse, with severe adverse consequences on municipal finances across the state.

The Office of Fiscal Analysis predicts that Connecticut’s current two year budget, if continued into the 2019-20 and 2020-21 fiscal years, will amass red ink totaling $1.9 billion and $2.7 billion respectively — gaps of 10 and 13 percent — or $4.6 billion across that biennium. Smaller, but still significant deficits have been experienced in Massachusetts and Rhode Island.

Contributing to the decline of New England’s bypassed cities has been the deterioration and congestion of the region’s aging road and rail systems. 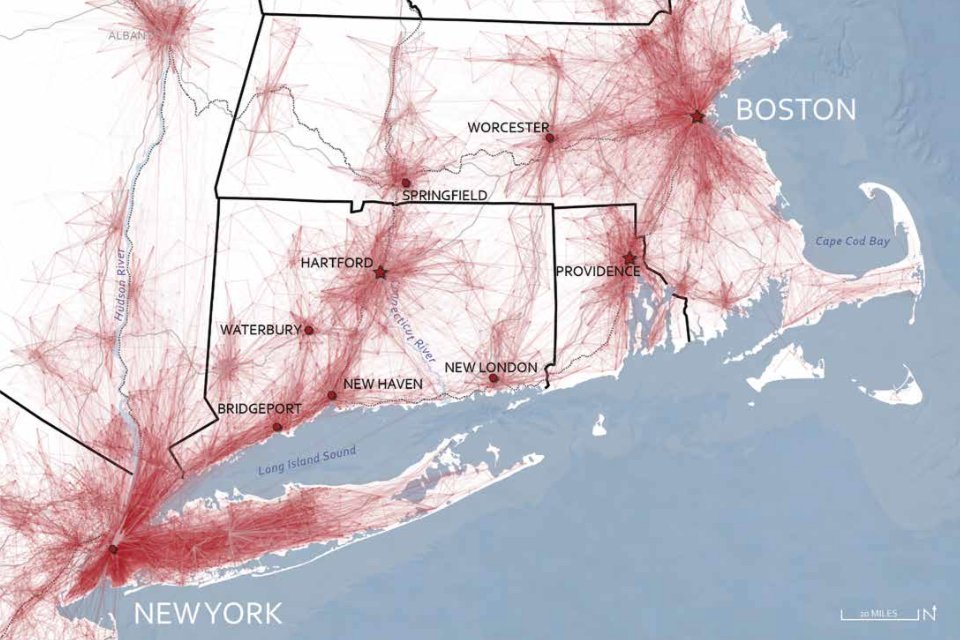 It is not difficult to identify assets that are being wasted by New England’s fragmented transportation system. New York and Boston are some of the largest, most productive cities in the United States, and yet there is no commuter activity between them. This is no surprise, when the fastest train trips between the cities take 3.75 hours, despite the cities being less that 200 miles apart.

Each of this study’s focus cities, in fact, are no more than 100 miles from either Boston or New York.

Inspiration from the U.K.

This concept builds upon the precedent of the United Kingdom’s “Northern Powerhouse” (NP) initiative, whereby the UK Government is investing upwards of $100 billion on new high-speed rail links and related urban economic development strategies to promote revitalization of several mid-sized former industrial cities across the North of England.

“By pooling ideas and capital, and cooperating to promote regional economic prosperity, the North of England’s mid-sized cities are functioning more as a constellation than a disconnected assortment of metros consumed by local interests.”

These five cities are a directly analogous in context to the small New England cities between New York City and Boston. Big  investments are being made successfully and rapidly in the UK. We can, and must, do it here, where it would have even greater impact than in the UK.