In 2019, a bill to study the feasibility of rail service between Boston and North Adams by way of Greenfield (the “Northern Tier,” an area the stretches west from Worcester County through Franklin County along Route 2) was filed by state Sen. Joanne M. Comerford, D-Northampton. Our friends at Trains in the Valley are the best source of current information. Visit their Northern Tier Rail Study page.

PanAm Main Line Through Pownal by W. A. Klinger

W. A. Klinger,  a retired Amtrak conductor, allowed us to share a proposal that would offer new passenger rail options to people in Vermont, Massachusetts, and New York. Part of his proposal is for a commuter rail link from North Pownal (including Willamstown and North Adams), through the Hoosac tunnel, and east on the PanAm main line to Greenfield MA and Boston.

This version of Mr. Klinger’s proposal was submitted to a Envision Vermont meeting on 24 June 2017. 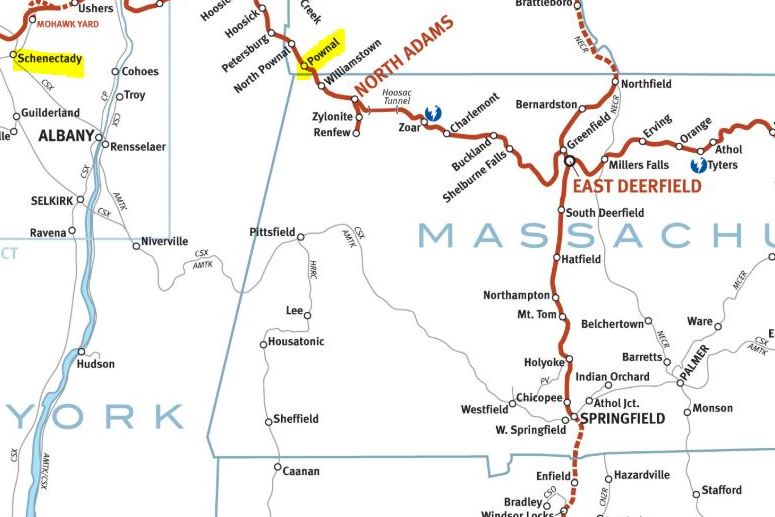 Pownal is host to the highest density railroad in the state of Vermont, the PanAm railway.  PanAm’s main line extends from Ayer MA to Mechanicville NY. The line cuts across the south west corner of town and has potential for development of  town owned, and other property, as a regional rail transportation hub.

I believe, a passenger connection between the Bennington area and New York City, can best be achieved, and financed, by establishing commuter rail service between North Pownal and Schenectady.

The town of Pownal owns real estate adjacent to both sides of the PanAm main line in North Pownal. This property was conveyed to the town during the dismantling and reclamation of the former tannery.

North Pownal is located at mile post  (MP) 434 on the PanAm (former Guilford freight main) line. Amtrak’s Schenectady station is at MP485 on the freight main. It is fifty-one miles between the two points on the recently upgraded PanAm/Delaware & Hudson railroads.

PanAm, and the states of Massachusetts and New York, continue to fund improvements on this important line. Projects to upgrade to heavier gauge welded rail, and, increase clearances to accommodate double stack loads are in progress.

Expected travel times, on the order of one hour, between Pownal and Schenectady are realistic for standard passenger rail equipment, including other station stops (at Eagle Bridge, Schagticoke and Mechanicville NY).

Typical running times of Amtrak’s trains, from Schenectady to New York City, are approximately three hours and twenty-five minutes.  Amtrak has recently added an additional track between Rensselaer and Schenectady, to reduce congestion and travel time.

With proper coordination of meets at Schenectady, total travel time to/from New York City, would be approximately four and a half hours. Driving time to downtown Bennington, from North Pownal is less than 15 minutes, traffic dependent.

A commuter rail shuttle, making four round trips to Schenectady daily, would offer flexibility of schedule. Travel to New York City and return the same day would be possible, if desired.

Vermont would save considerable monies over having to buy and maintain its own equipment. It is also possible that PanAm might want to provide equipment and operate the service, but I have not talked with them.

Federal dollars are still in place, through the US Department of Transportation (US DOT), to create and operate new commuter rail service. By tapping US DOT funds, project start up and operating costs could be managed at minimal expense to Vermont tax payers.

I have not recently reworked the numbers, but the proposed commuter rail service, with four round trips a day, seems quite attractive.

My best guess is approximately $35,000,000 for initial start up, and first year’s operation.  I believe that is conservative, and may turn out to be lower. Some infrastructure upgrades will have to be done in Mechanicville and elsewhere on the PanAm line, which may be funded in part by NY DOT and  US DOT programs.

18 Months to Get Rolling

Once the funding, and agreement by the necessary parties,  are secured, this new, important commuter rail service could be up and running in a year to year and a half.

I have also been talking with folks in Berkshire county, MA about a commuter rail link from North Pownal (including Willamstown and North Adams) through the Hoosac tunnel, east on the PanAm main line to Greenfield MA and Boston.

Why shouldn’t we do that by rail?

I know many people who regularly travel back and forth from this area to Boston for medical treatment, education, culture and sporting events. What a boost to the area’s tourist business it would be, if we had a morning and evening train daily, to/from Boston.

Metropolitan Boston Transit Authority (MBTA), better know as “The T”, provides service from North Station in Boston to Fitchburg MA over the PanAm main line, with plans to push out to Gardner.

North Pownal is approximately 154 miles from Boston, 100 miles from Fitchburg (nearest MBTA stop), and 50 miles from Greenfield MA over PanAm.

If service to Boston were re-established using MBTA, estimated travel time to Boston from North Pownal would be approximately three and half hours, including stations stops.

1 Hour to Greenfield MA, as an Alternative

Several years ago, the state of Massachusetts purchased the old Boston and Maine railroad’s, Connecticut river (Conn river) line from PanAm railway. Since then, MA DOT has upgraded the line. Amtrak’s Vermonter has begun using the line again, with stops in Springfield, Northampton and Greenfield. The Conn river line and the PanAm east-west main to Boston, meet in Greenfield.

As an interim program, commuter rail service should be established to Greenfield MA. This would allow travelers a connection to Amtrak. Travel time to/from Greenfield would be approximately one hour.

Unfortunately, due to political maneuvering, MBTA has been encumbered with significant debt, related to the “Big Dig” construction project. Consequently, MBTA’s ability to maintain current services is under pressure. Additional service will not likely see the light of day for some time to come.

Use for Idle Property

One of the nagging, on-going debates in Pownal is what to do with the former Green Mountain Race Track property. This property sits astride the PanAm main line through Pownal.  There is more than ample room for development of a future intermodal (container transfer from rail to truck) freight terminal here.

The property is well located to have access to important points in Vermont, and Western Massachusetts. The nearest current intermodal terminal is in Mechanicville NY on PanAm. This recently constructed facility is already well utilized and will hit capacity in the next several years.

Locating a new intermodal yard in Pownal would add capacity to PanAm and cut travel time and road miles (and carbon emissions) for motor freight to our area.

If the old wire mill (presently held by Mac Molding) can be procured, warehousing capacity can added be as an important feature of the intermodal operation.

Development and operation of the intermodal plant will add new, well paying jobs to Pownal. Productive use, of currently unused property, will increase the town’s tax base.

I cannot offer any estimate of the new property and other tax revenues that would accrue from this development, but it would not be trivial. At this point, anything helps.

During construction, some 50 temporary construction jobs will be added. From 10 to 20, permanent job could develop, once the intermodal plant is operating. Addition of the wire mill warehouse would add more.

Operation of the intermodal facility will add demand for other local commercial and support services. Office supply, communications, building repair and maintenance, will be needed. Workers will add demand for restaurant and personal services to town.

Development of an intermodal facility would grow the town in a way that utilizes idle properties, and makes both economic and environmental sense.